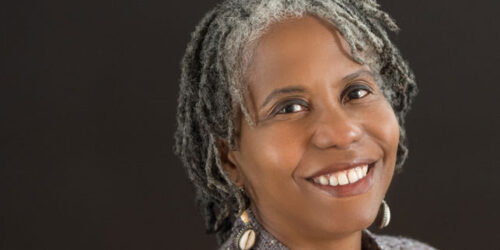 “The pandemic that began escalating in March 2020 exposes so many injustices that have been in place – and have visited trauma on folks – for generations. It is a new season to turn to one another with what we’ve come to know and how we’ve come to be over the years.

“What fired me up as a young teen growing up in the South was imagining what could change despite injustices that seemed impossible to turn around. I reached out to connect with people who were unapologetically radical, folks working toward a world of Black liberation and women’s liberation.  As a result, I found myself reading long handwritten letters sent from prisoners who were being abused by incarceration practices, including medical and psychological experiments.  I campaigned for Shirley Chisolm with wild hopes (in the 1970s when electoral politics seemed to be a shining way forward) of electing the first Black woman President of the U.S. These were lasting inspirations for analysis and action to spark systems change.  At the same time, noticing how people were locked out of voter registration and the voting process, I spoke up about it in the local newspaper. Something had to be done, and I had to be part of the solution.

“In, DC my involvement took off in the 1970s with organizing for housing justice and community-centered economic development. Since that time, I’ve become ever more deeply committed to building relationships and building power so that all people can thrive.”

Brigette Rouson, J.D., M.A., (she/her) is principal of Rouson Associates, a consulting practice formed to support policy advocacy, then turning to broader capacity building. She brings over 30 years’ experience advancing nonprofit effectiveness toward a just society. Brigette is a member of the RoadMap network of social justice consultants, serving on its leadership teams for over 4 years. She is deeply committed to bringing an equity frame to organizational change and leadership development, facilitation, training, action research, and public speaking.

Brigette has designed and supported many initiatives to transform groups, community and society — which includes planning and facilitating hundreds of sessions. Her work centers racial justice and intersectionality. She has worked with more than 250 groups on strategic planning, board and staff development, nonprofit advocacy, and in all respects making equity front and center. Process expertise includes generating staff-wide consensus on organizational change priorities using the Ford Foundation’s organizational mapping tool for BUILD grantees, and multi-stakeholder assessment with RoadMap’s My Healthy Organization for grassroots and national groups – with attention to race, power, and privilege throughout.

She has consulted independently and with colleagues, including staff positions at Management Assistance Group (now Change Elemental), Mosaica: The Center for Nonprofit Development and Pluralism, Maryland Nonprofits – and its national Standards for Excellence Institute.

Formerly, as national program director of Alliance for Nonprofit Management, Brigette co-led a capacity builders of color network that sparked the Cultural Competency Initiative, for which she was a presenter and trainer, book co-author and project manager, and in a pivotal staff role setting professional standards to move the field toward equity. Brigette has worked in philanthropy to support increased power-sharing across racial/ethnic, generational, LGBTQ and other cultural identities. At Ms. Foundation for Women, she led a $4 million multi-year grantmaking and capacity-building collaborative for girls’ and young women’s leadership, with support to 14 community groups rooted in African (Black), Indigenous, Latina, Asian and Appalachian (White) ancestry and cultures.

Brigette is a proud graduate of Howard University (B.A.), Georgetown University (J.D.), and University of Pennsylvania (M.A.) where she also completed coursework toward a Ph.D. in communications and culture. She is a DC Bar member. Community leadership includes serving as a co-founder and board of instigators member of Diverse City Fund – a grassroots grantmaker for social justice work by global majority people in DC – and representing the fund in a regional grantmakers racial equity working group. Brigette is an elected board of social action member for her faith congregation, and actively involved in advocacy, organizing and other liberation groups.

Brigette is dedicated to learning and thought leadership, serving as keynote speaker for regional and national convenings such as Alliance for Nonprofit Management, session leader at grantmaker and capacity builder conferences, and participant in gatherings by Facing Race and Equity in the Center, among others.