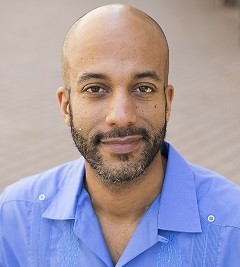 “There must have been over 1,000 black and brown fist pumping in the air chanting: ‘On the move! On the move! On the move!’ I had just stepped into the opening plenary of the Critical Resistance Conference: Beyond the Prison Industrial Complex. I only stayed four hours but couldn’t manage to talk for the rest of the day until the answer hit me: I need to learn how to organize.”

Like you, Damon wants to live in a world where people have more freedom of movement across borders than goods do; where genocide, occupation and sex trafficking are words barred to history books (yes, there would still be books); and transformative justice would be a universally respected human right.

For over 20 years, his work has supported the leadership and political development of working class youth all the way to elders in their nineties. As a Certified Professional Coach and Racial Justice Organizer he encourages clients to not hide, but embrace their cultural background, their political analysis, and their spiritual practices. From this perfect acceptance, clients find out-of-the-box solutions to the challenges of leading organizations and building movements. Damon’s social justice work includes winning radical truancy ticket reform and police accountability in LA public high schools and supporting veteran and emerging leaders in the domestic violence field in California.

When he’s not coaching or designing leadership development curriculum, you can find him under a tree somewhere studying to be a more proficient Ifa priest—Ifa is the traditional spiritual practice of the Yoruba peoples in Nigeria.

In addition, Damon builds the capacity of social justice organizations nationally as faculty with Leadership That Works where he trains facilitators and coaches; as a RoadMap affiliate; and as a Coaching for Justice core coach. Damon coaches worldwide, but lives in his native South Los Angeles with his wife Cynthia and sons Maceo (6-years) and Fasola (4-months) who are lively characters, to say the least.