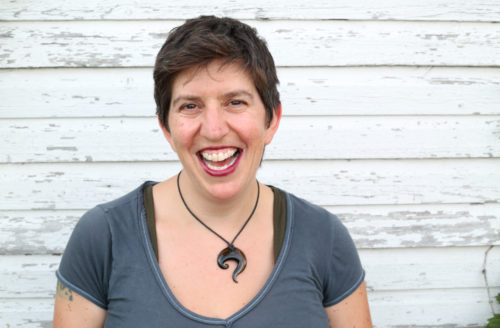 “I grew up Jewish and middle class in Upstate New York, acutely aware that I was different from the primarily white working class population around me.  I was politicized by my parents, who were professors turned human services workers.  At fourteen, I led my first protest against CIA recruitment at Cornell University and haven’t looked back.”

Dara Silverman has worked as a consultant, coach, organizer and trainer who has been building movements for economic, racial, gender and social justice for the past 20 years. Dara was the Executive Director of Jews for Racial and Economic Justice (JFREJ) in New York City from 2003-2009. She was a leader and then the Founding Director of Showing Up for Racial Justice (SURJ) from 2011 to 2016. Currently, Dara is a Director at PowerLabs where she specializes in helping groups move people from online to offline action.

Dara has extensive experience supporting organizations and leaders to take on gender and racial equity work in deep and meaningful ways. She has worked with groups developing and planning campaigns, supporting new and experienced organizers and executive directors, grassroots and individual fundraising, strategic planning, and board development.

Dara lives in Beacon, NY, in the Hudson Valley and splits her time between coaching, consulting and teaching yoga.