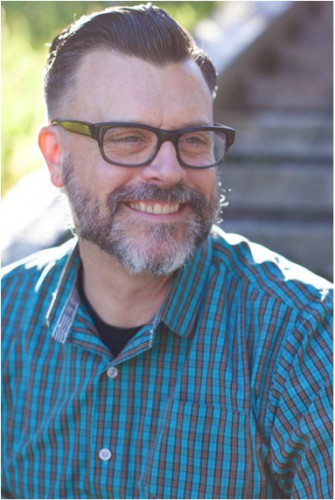 “My mother lived with schizophrenia and was an early role model for me in claiming your identity, even when the larger culture may be hateful and disapproving. I remember how she would critique representations of people with schizophrenia in the media, who are so often depicted as dangerous, frightful and worthless to society. She refused to accept these negative images and spoke out against them. She took their power away by saying to the world, “I won’t live in shame.” So many of her actions showed me a pathway that started with self-acceptance, then lead to speaking up, that then lead to taking action. Her example, although I was unconscious of it at the time, led the way for me as I came out of the closet in the late ’80s. AIDS was tearing through the country, taking too many lives too soon, too fast. In Pittsburgh, PA, I got involved with ACT UP and Queer Nation, where I learned I could be radical and fabulous and part of a social change movement. It was also there that I started doing community screenings of political documentaries, experimental video by queer filmmakers of color like Marlon Riggs, community discussions, youth-produced media, and more. I was fully immersed in the intersection of social change and creative expression, and I felt so alive.”

Dewey Schott coaches individuals who are committed to transformational social change. People who have witnessed suffering, oppression and injustice but who have the guts and the mettle not only to heal themselves, but to heal the world. He considers himself part punk, part mystic and part organizational development nerd. He has more than 19 years of experience working in the social and cultural sectors, specializing in capacity building and leadership development. He is particularly interested in supporting LGBTQ leaders.

In addition, he coaches for the Evelyn & Walter Haas, Jr. Fund through the Flexible Leadership Award program; teaches and mentors new coaches with Leadership That Works, a socially-conscious coach-training organization; co-facilitates the NAMAC Leadership Institute, a yearlong leadership program for emerging and established leaders in visual and media arts organizations; is a member of the Coaching Affinity group of the Alliance for Nonprofit Management; and is a founding member of Coaching For Justice.

Dewey has a bachelor’s degree in interdisciplinary studies from the California Institute for Integral Studies. He received his coaching training certification from The Coaches Training Institute in 2006 and also has a Professional Certified Coach (PCC) certification from the International Coach Federation.

Dewey lives in Northern California, with his partner Alan and his teenage daughter Pepper.