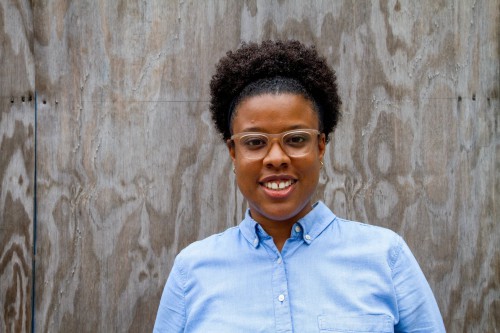 “I sat upstairs in my aunt’s bedroom escaping into her copy of Angela Davis’s autobiography. In the kitchen below my mom and aunt discussed what to do with me. After a series of issues it had become clear to my family that it was no longer safe for me to live with my parents. As I devoured Angela’s words I felt inspired by her strength. As I read about the struggles that she was facing I realized that no matter what happened with me, I was going to be fine. I first started organizing because I wanted to support all people who’ve ever felt powerless, marginalized, and oppressed to grow their leadership and to win concrete changes in their lives. As I continue to organize I realize that everything I now know about strategy I first learned through survival.”

Ejeris Dixon is an organizer and political strategist with 15 years of experience working in racial justice, LGBTQ, anti-violence, and economic justice movements. She is the Founding Director of Vision Change Win Consulting where she partners with organizations to build their capacity and deepen the impact of their organizing strategies. From 2010 – 2013 Ejeris served as the Deputy Director, in charge of the Community Organizing Department at the New York City Anti-Violence Project where she directed national, statewide, and local advocacy efforts on hate violence, domestic violence, and sexual violence. From 2005 – 2010 Ejeris worked as the founding Program Coordinator of the Safe OUTside the System Collective at the Audre Lorde Project where she worked on creating community based transformative justice strategies to address hate and police violence.

She speaks and trains nationally on community organizing strategies for police violence, hate violence, sexual violence, and intimate partner violence as they impact LGBTQ communities and communities of color. Her writings and analysis have been featured in the New York Times, Huffington Post, SPIN Magazine, and CNN. In 2012 the White House recognized Ejeris as both an Emerging LGBT Leader and selected her as a featured speaker on violence against Black LGBT communities. She received a Bachelor’s Degree in African American Studies at Yale University and a Master’s Degree in Public Policy and Nonprofit Management at New York University’s Wagner School of Public Service.

She lives in Brooklyn, NY but loves to visit any beach anywhere. And is a self-proclaimed karaoke diva!