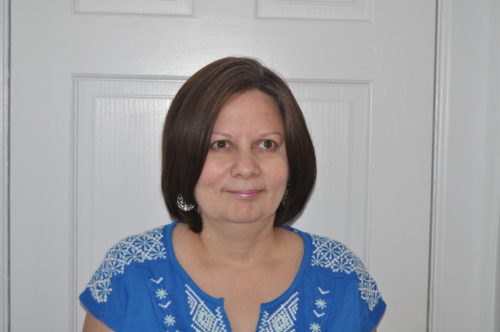 “I remember being about 14 years old, forgetting my keys, and having to go for the first time to the factory where my mother worked as a seamstress. When I opened the door, I felt as though I had entered a Charles Dickens novel. The walls were made of cinderblocks covered in thick black soot, there was garbage strewn all over – it was really dismal.  There were rows and rows of women crouched over sewing machines – you could sense their sadness, tiredness, hopelessness. I remember thinking this sure isn’t the America I see on TV… my social consciousness was forged that day, and by the time I graduated high school, I was an organizer with the Puerto Rican Socialist Party.”

Elsa is one of the leading organizational development faculty members of the Move to End Violence initiative. Elsa has more than twenty-five years of nonprofit experience in the areas of management, grant-writing, program design, community organizing and public policy analysis and writing. Her consulting firm, Strategies for Social Change, LLC, specializes in organizational development services and works on numerous issues relevant to communities of color and social justice groups. Her practice areas include strategic planning, executive coaching and leadership development, team building, executive transition planning, board governance and policy advocacy campaigns. She attended the New York University Coaching Training Program and is a certified coach.

During her public service career, prior to becoming a consultant, Elsa held several executive level management positions. Her accomplishments include having served as the Founding Director of the Violence Intervention Program, Chief of Staff for the Puerto Rican Legal Defense and Education Fund, and Senior Policy Analyst for the Mayor’s Office on Health Policy (under Mayor David Dinkins). Elsa served as a trustee of the Jessie Smith Noyes Foundation for six years and on the Board of Directors of the Violence Intervention Program, a grassroots, bilingual/bicultural battered women’s organization based in East Harlem.

Elsa is an adjunct faculty member at Baruch College in the School of Public Affairs and a core consultant with the Builders for Change program at Adelphi University. She has taught several subjects including fundraising, leadership and management, strategic planning and cultural competency. She is also the Executive Producer of the Reproductive Justice Toolkit Video Series commissioned by the Funder’s Network on Population, Reproductive Health and Rights. Elsa holds a Juris Doctor degree from New York University School of Law, where she received the prestigious Root-Tilden-Snow Scholar Award in recognition of her public service achievements. She also holds a Masters of Science degree in Social Work from Columbia University and is a graduate of the Columbia University’s Institute for Not-for-Profit Management.

Elsa lives in Bayside, NY and you can visit http://www.strategiesforsocialchange.com. Elsa is fully bilingual (English/Spanish) and has published numerous policy advocacy reports, some of which can be found on the website.