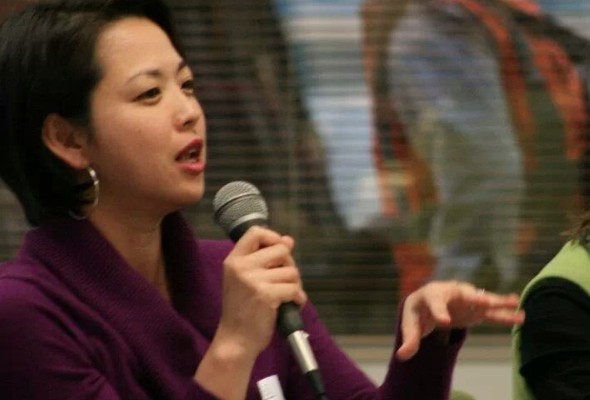 “My commitment to social justice stems from my family’s experiences of being the only family of color in our neighborhood and the injustices especially my parents experienced while living in the Midwest. When I was around 10-years-old my father was cornered in the bathroom at the furniture factory where he worked for 8 years. He was beaten by his white co-workers for being an immigrant and “stealing American jobs.” He unfairly lost his job but felt like there was little he could do about it. It wasn’t until much later when I became an activist fighting for the rights of minority students of color in college that I realized that my father felt powerless and voiceless. Ever since, I have been working to make sure people without power have a voice.”

Jung Hee Choi has 15 years of combined experience in the fields of journalism, communications and social change. Jung Hee has provided leadership and directed communications strategies for a variety of respected non-profit organizations and labor unions in the Bay Area and Los Angeles. Most recently, she spent the past eight years as the communications director for Community Coalition in South Los Angeles, helping to elevate the organization’s visibility and profile as a national organizing model and leader in Southern California.

Currently, Jung Hee is an independent nonprofit consultant who specializes in developing communication systems, infrastructure and strategies that integrate with community organizing campaigns in order to maximize power and visibility. Utilizing her many years of experience in leadership, she also provides consulting services to organizations on leadership development and training and organizational planning and management.

Jung Hee’s writings have been published in numerous newspapers and she is the co-author and co-editor of several publications. Jung Hee has a Bachelor of Arts in Journalism from the University of Missouri-Columbia and Masters of Arts in History from San Francisco State University. She lives in Los Angeles with her husband and two children.