Have you ever wondered: what if we could combat sexual harassment within our social justice organizations in a way that is aligned with our political visions and values?

Over the past year, RoadMap has been working with 9to5 National Association of Working Women to combat sexual harassment in social justice organization through RoadMap’s Weathering the Storms (WTS) program. We sat down with Mary Ochs, RoadMap’s co-chair of our WTS team to learn more.

What is RoadMap doing and why is this work connected with the WTS Program? 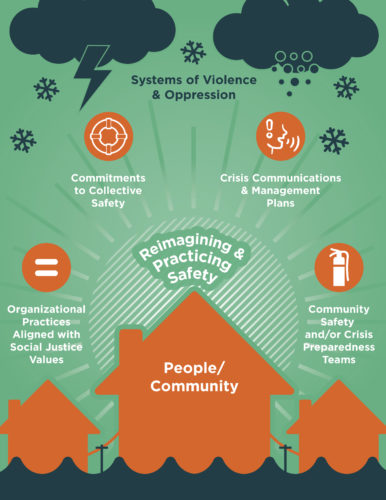 Mary Ochs (MO): The work to combat sexual harassment comes up a lot through Weathering the Storms (WTS), as a lot of HR-related issues and concerns that surface when we do the Getting and Keeping Your House in Order checklist & other WTS-related work we’re doing with organizations. It touches so many groups. When I think about RoadMap’s framing around the WTS being a way to reimagine and practice safety, about understanding harm and that attacks can happen both internally and externally – it asks us to be walking the talk about healthy effective transformative organizations – and that means organizations that proactively combat sexual harassment.

We partnered with 9to5 because of their expertise and long history or work in combating sexual harassment and gender bias. We want to uplift their legacy work and grow our collective capacities.

In terms with what we’re actively doing, we did the webinar with 9to5 and Amanda Aguilar Shank from Freedom to Thrive, formerly known as Enlace. We had 5-600 folks register for it. There was an entire organization who watched it together and talked about it. At its most simple, we wanted to urge organizations to not limit themselves to the law but go above and beyond.  We incorporated Amanda and her story and opened many eyes about what often when harassment goes on: we tend to basically get rid of the harasser if we address it and not think about where else they go and if they continue to harass others. Or if we like them, then we don’t deal with it at all. It opened our eyes to all the damage that it caused the people being harassed, to the whole ecosystem, and the perpetrator and how one deals with that.

Beyond Firing: How do we create community-wide accountability for sexual harassment in our movements? by Amanda Aguilar Shank

That’s a big kind of question – which we did get some feedback that a few were uncomfortable with the idea that maybe we should do more than just fire the harasser. A few folks felt like we were somehow tolerating bad behavior or forcing the person who was harassed to have to deal with the harasser. For us, in our definition of community accountability and transformative justice, we always start from a place of consent and supporting the victim(s). Amanda also introduced for the concept of prison abolition, which is not discussed in a typical sexual harassment training.

This is the challenge: to get the folks who do traditional training to incorporate some of these other questions and possibilities, even if they’re not comfortable leading transformative justice processes. We want folks to be aware that they have many choices as a movement – that it’s not just about calling the police or firing someone. There are all these considerations that relate to social justice groups’ values. How we deal with sexual harassment and violence that damage our movements and organizations connects to racial justice, gender equity, and shows up in other systems of oppression too.

I do think our training, while not trying to take on everything – at least raises questions about how we are dealing with harm in our organizations and we don’t have to just do the standard of the law says we should do or not do but opening our eyes out to other possibilities. Very few states have any training requirements, with California and recently New York being the exceptions. We always will do compliance training, but we don’t want to limit ourselves – and we’re urging organizations to not limit themselves/their sexual harassment policy to only what the law requires.

MO: We want to give people real world examples – some people get it right away, and other folks don’t so the examples are really important. It’s also important to this have a wider lens to the issue: harassment can impact others in the organization.  It creates fears and triggers other experiences, other people experienced some version of the harassment but didn’t do anything or knew it was happening but didn’t know what to do, so it affects the whole team and movement ecosystem – we’re looking at it from that point of view.

Another thing we do is that we will always send two trainers, and ideally one of those is a person of color.  Depending on audience – gender-wise, it might be a training team made of a man/woman or might be non-binary/trans folks, and work to make sure the audience have folks to identify with.

We also will not do just a one-off training. We have to have a package: pre-work on the policy and assessments, the training in-person and it must be four hours long with some time explicitly for supervisors and two additional hours for follow up implementation and coaching. We’re hoping to offer this in some other languages. We have some capacity in Spanish, but still have more work to do there. Our approach and content are geared to our organizations and our field, with racial justice/gender justice values brought into it and structured in a way that we will feel maximize the training outcome sand that will help the content really stick.

What are the problems and obstacles you’re running into in this work?

MO: Capacity, limits to access around different languages, and getting folks trained to deliver this important work.

And resources: we need more resource to get more folks trained in this. The work is there, but the resources getting folks trained up and for training itself isn’t. It takes money and time. Getting people training for one day isn’t enough, as it’s not just a something that touches staff but also clients and members. We have to show the dimensions of this and the great need, because we’re just scratching the surface.

We’re also trying to balance what people are already doing with compliance training – how to support that, but also go beyond it.

What have been some of your biggest successes in this work?

MO: A big success for me is our partnership with 9to5. It’s a model for when a group of consultants decide they want to take up something, let’s look up the people who have been doing this for a long time and ask ourselves: How do we add to the field and not compete and replace the work that others have done? How do we honor legacy? And we’re doing this partnership in a way that’s also doing that – slowly and well.

The webinar is big success to me too – hundreds of folks joining and lots of people got follow up and got answers to questions they had. We’ve been serving 13 orgs and all of them would say they are getting really good help. And we’re all stronger as a result of our approach – people are appreciating our approach, to not just check the box but understanding that this is larger than that.

What do you hope this work does in the long term?

MO: I feel like we need to model what healthy relationships look like in all sorts of ways – and if our client organizations aren’t doing that, we have to question what is the impact we are really having? It’s connected to resilience, self-care, walking our talk, and reimagining and practicing safety.

One of our RoadMap consultants said on a recent call that we’re building the new generation of movements and movement formations, and part of that is building in accountability for behavior, feedback, and addressing any kind of harm – not just sexual harassment. I was assisting an organization with strategic planning but then learned that the director was married and had affairs with women in the organization and allied movements. It was awful for the women in the movement and impacted their work and work with allies. And subsequently we had to talk about it – even though it was in the past, it kept coming up. They didn’t have systems in place for accountability so nobody did anything and called it a “a private or personal matter” as if it doesn’t affect everyone but clearly it did. It affected everyone for years. There were years of remorse, guilt, and trying to find answers.

We don’t do that stuff well in the US. I’ve found that in other countries and their movements, there are folks who have a way of dealing with those things that are very different: collectivized, not bringing in the police, or treating it as a “private matter” and things get addressed. We need to share what we’re learning so we can learn from each other. If we can’t figure out how to be with each other in healthy ways – how are we going to work with each other, how we are to “govern” if and when we get here one day.