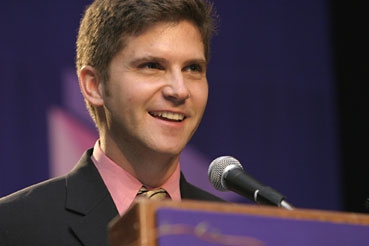 “When I was 19, I found myself in a fiery debate about the Constitution and Christian scriptures. The context was an effort by antigay activists in my Ohio college town to repeal nondiscrimination provisions of a local ordinance about fair housing. Arguments rooted in the Bill of Rights and 14th Amendment came up against arguments against gay people from Leviticus
and from materials produced and peddled by out-of-state religious right organizations. While proponents of civil rights lost that campaign, it helped carry me into the field of advocacy and coalition-building with a special focus on ballot measures and how mainstream leaders and organizations work together to build capacity and win and sustain their policy goals.”

Hans Johnson is the president of Progressive Victory, a political consulting firm that guides organizations, coalitions, and candidates in improving and using data to advance their missions and win campaigns. I have worked on elections in nearly every state of the union and on ballot measures in more than 20 states.

In addition, Mr. Johnson has advised foundations, unions, coalitions, organizations, and individual leaders on using data to refine and target their fund-raising and communication strategies.

Nonprofit advocacy is both a professional calling and a private avocation. A longtime board member of the National Gay and Lesbian Task Force, I am outgoing vice chair. And I am past board chair of the Ballot Initiative Strategy Center (BISC) Foundation.

As a native Midwesterner, Mr. Johnson is a contributing editor covering labor, religion, and politics at the Chicago-based national news magazine In These Times. His commentary also appears on the Huffington Post and daily oped pages and can often be heard on The Young Turks.

In 2008, Mr. Johnson organized and raised money to endow a scholarship for his alma mater, the College of Wooster, in Ohio, to honor a late and longtime LGBT member of the staff. Now in its 5th year, the scholarship goes to a standout student active in increasing awareness of the contributions and advocating for full equality and participation by LGBT people in the life of the college and community.

Mr. Johnson’s specialties in consulting are coalition strategy, internal and external communication strategy, fund-raising strategy, acquisition and application of voter and other data for fund-raising and leadership development purposes, and strategies for nonpartisan voter participation, including early and absentee voting.